Since I am in a flare and haven’t posted anything for a while I thought I’d give you all an idea of what I do for a “cleaning out the fridge” meal.  And since it’s Lent (or was lent when I began typing this up) I thought I’d do a dish without animal products.

While this one is not AIP (due to the nightshades and seed seasonings) it is paleo and vegan….or “Pegan” (for those of you who follow Dr. Mark Hyman.  He has some good articles on his blog if you are eating a paleo diet and want reasons to increase your veggie intake)

When it comes to the few days before payday we tend to be on a tight budget and well we don’t get around to grocery shopping until the weekend after payday so this is when I have to get a little more creative with my lunches, and it’s great because I am the only one home and can eat what I want without having to please picky eaters.  Since I don’t want to toss foods I tend to do “cleaning out the fridge” meals, these are usually stir-fry style dishes, soups or curry made up of veggies and left over meats.

So today’s dish is a veggie medley swimming in some tasty coconut milk and flavored up with curry full of anti-inflammatory turmeric. And I am spur of the moment and refuse to measure so things are honestly eyeballed and just done to taste.

In a skillet I put in about 2 tablespoons of a cold pressed organic coconut oil (I love the smell so I rarely buy the refined stuff) then added a few cloves of minced garlic minced and cooked until the garlic is beginning to become transparent. I then added about a tablespoon of curry powder and let that cook until it’s spicy aroma fills the kitchen…so maybe a couple of short minutes.

Next I add what every veggies I have on hand. Adding in the harder veggies first and the softer ones last so that I can have all the veggies cooked perfectly in the end. This time it was a large white sweet potato peeled and diced which I let cook for about 5 minutes while I worked on prepping other veggies. Next came a few carrots sliced and roughly cut into quarter slices (remember I’ve said in previous posts I am a lazy cook), then came about half a head of rough chopped cauliflower. I let those cook a few for maybe 10 minutes, until they were still firm but soft enough to lose the crunch. Once those veggies were cooked to my liking, I added half a brown onion cut into bite sized pieces and some sliced portabella mushrooms. Gave it just enough time to cook for the onions to become transparent before moving on.

At this point I decided I wanted more curry flavor, so I added a bit more curry….maybe another teaspoon, and then added in just enough of a can of coconut milk to coat everything  and a three finger pinch of sea salt.

Then finally I added the green stuff…so in came a few green onions chopped into inch long lengths, a couple of large handfuls of spinach, a handful or arugula, and a handful of cilantro. And let it finish cooking until the greens were wilted.

Other items that would be tasty to add into this would be chicken, shrimp, green beans, and if you are not eating a strict paleo diet potatoes and peas are also tasty in curries.

This is typically how I cook, a little of this and a little of that and then season to taste. Cooking can be quite fun when you don’t hold yourself to strictly following a recipe. So just use this as a guide to help you make this recipe your own. 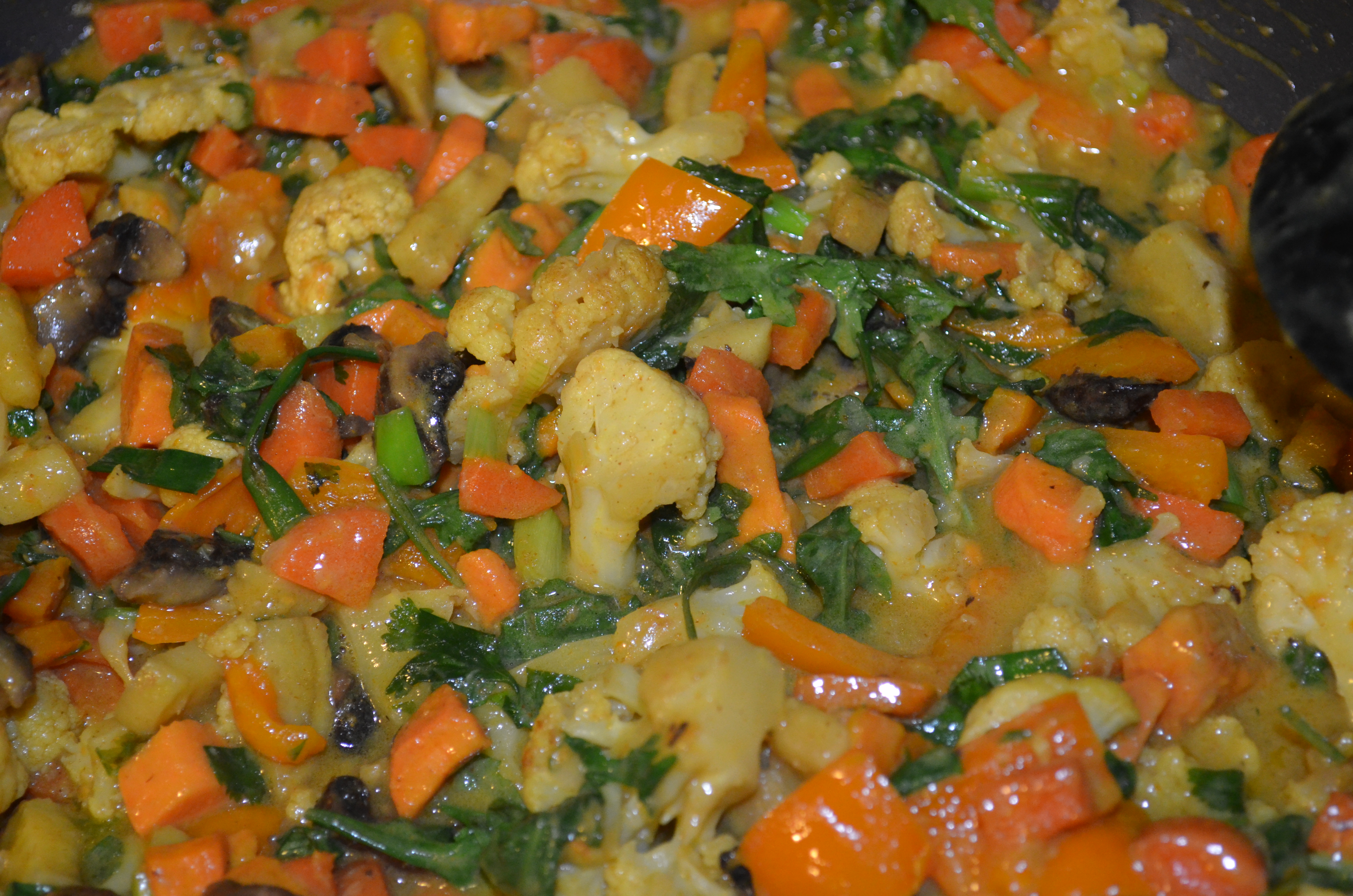