Christopher is 44 years old. He has worked in construction his entire life. Most of these journeys on this site are women. His is his own but with allot of similarities, when it comes to MCTD. His illness has been going on for the 25 years I have been married to him. It wasn’t constant and he never saw a Dr over anything. However it was enough for him to miss allot of work and take a job he could take off when he needed to. Some years were harder than other years. His complaint was just feeling over all unwell.

It wasn’t until 2015 when he came to a point where he just couldn’t move past his unwellness. It started around the beginning of the holiday season. I noticed he was not eating very much. He just shrugged off him not feeling well like he always had done in the past. His last day of work was in November. In the beginning of December I had made a Dr appointment for him. He didn’t have insurance and so it was a low income clinic. The Dr ordered x-rays. The results was he had a huge mass in his colon. The size of a volley ball. Located in  transverse/descending to sigmoid part of his colon. The Dr mentioned he probably needed a MRI but seeing he didn’t have any insurance we probably wouldn’t have the money for that. His regime caused Chris to become sicker have more pain and almost death. December 15th he ended up having emergency surgery. Where he spent over a week in ICU and a long stay in the hospital fighting for his life. He had septic shock. Kidneys had shut down. His pulse very high.  Scared us all to death !  He had lost 12 pounds in surgery. They told me that his prognosis was not that good. That maybe I should think about what I would do if he passed. Also when the surgeon came out of the surgery he told me that it was cancer and that they might recommend chemotherapy because his lymph nodes were large. It was later determined it wasn’t cancer but ischemic colitis with toxic mega colon. With hyperplastic lymph nodes.  Basicly the blood flow was ceased to colon which caused the colon to die and swell which made the mass and also had swollen lymph nodes. It was a mystery at the time what had caused all of it. The Dr’s were just focused on saving his life. It was months of wound care after his hospital stay. Six months before he even knew who people were or where he was. He wasn’t recovering as they were saying he should of been recovering. He was going downhill not uphill with things.

In 2016 he was  living in constant unbearable pain Had allot of symptoms of what we didn’t know and couldn’t figure out; raynaud’s, sjogren’s, weakness, joint and muscles, butterfly rashes, red face all over. Allot of different things, these to name key points of some. He kept making his peace with god and telling me that his time was coming near to the end. He was having allot of PTSD from everything as well. His mind never was the same as it was before all of this had happened to him. He had pneumonia 4 times that year. His lungs would not get better even with rounds and rounds of antibiotics. By this time we had applied for social security and appealed it. Still without any insurance and little money from him not being able to work. Had a Dr tell me when he was in the hospital that he was having auto immunity problems and it was very important for him to be under the care of a Dr. It was after that I started keeping a list of complaints and problems he was having. Writing up  reports to take to the Dr’s he would see.

We would overwhelm the Dr. I do feel like this helped things along and get diagnosed faster. When going to the Dr’s they would spend 2 hours talking with him and asking questions. First diagnosis was Fibromyalgia Prescribed anti depressants. Was making appointments two months apart at this time.  Second diagnosis was Myositis/Dermatomyositis/Polymyositis. Was floored when I looked this up. In a way it fit everything he was going thru, I just had a hard time understanding it all. He kept going to Dr’s and they kept giving him this or that to try and help him. Nothing really seemed to help though.

It was the beginning for 2017 when we saw a different Dr. This Dr spent literally four hours interviewing him. Wanted a bunch of tests. Prescribed Prednisone. High doses. Enough for a week and wanted him back the next week. Had + ANA ( Two of them ) ; negative anti-smith, negative anti-double stranded dna, Had very high RF factor, very high Sed rate, Had 3 patterns. Nuclear, Speckled and Cytoplasmic. Also had a very high RNP antibody. High titers. He was getting differential diagnosis that included ; MCTD, Lupus, Dermatomyositis, Polymyositis with each one included Myositis.

Today they have settled on Refractory Mixed Connective Tissue Disease. He see’s primary Dr’s and specialist every 3 months. He takes a ton of meds. He got approved for his disability in court earlier in the year. Most days are a battle for him. He also has arthritis and degenerative disease in back, hips and in most of his  joints. He focuses on running his chicken boards on facebook and raising his chickens to keep him entertained. He takes one day at a time. He has done a good job at staying motivated and moving forward. Sometimes this is hard, but he manages. He has allot of family and friends who love him. Encourage him to keep moving. He is scheduling to have infusions to help his disease. Only God knows what is next for him.

This story may seem long but trust me when it is the very shortest version possible. 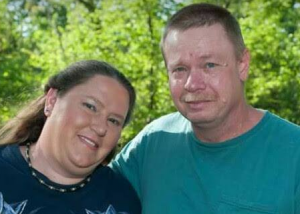