So what is a paleo diet?

So what is a paleo diet? Some term it the “Caveman diet”, the “hunter and gatherer diet” and there is a lot of theory about how it brings us closer to what our early ancestors ate. And maybe in some ways it does, but not only have the foods changed since the Cavemen existed, but we have more availability of a greater selection of foods and access to many foods year round. And well more issues of soil depletion. So it’s not exactly the diet early man ate because times have changed.

What it is though is a way to bring foods high in nutrients into our bodies and a way to eliminate foods that cause many people inflammation and IGG (more of a sensitivity than a life threatening allergy) allergic reactions. I believe it is a way for us to basically do an elimination diet to allow ourselves to be able to listen to how our bodies react to certain foods while giving ourselves the best nutrition possible.

A paleo diet includes:
meats/proteins– preferably meats and eggs (eggs are excluded from the autoimmune paleo diet because they are a food that causes an allergenic response in many people) that include labels with the words; wild, grass fed, organic, pasture raised.  Those will be higher in nutrients and lower in toxins due to the care and feeding of the animals. This could include, lamb, ostrich, buffalo, beef, chicken, turkey, pork (most pork is grain fed and many people who do not tolerate any grains will not be able to tolerate most pork), wild boar, venison are all easily found in many natural grocery stores these days.
Vegetables– fresh or frozen are best. Dried in the oven on a low temperature or in a dehydrator make yummy snacks when you need something with some crunch.  This could include greens, lettuces, root veggies (while sweet potatoes and yams are paleo safe regular potatoes like russet and Yukon potatoes are not technically on the paleo diet this is due to it causing an insulin spike because of them being so high on the glycemic index, and they are also high in saponins which works like a toxin in our gut and contributes to leaky gut). Foods that we treat as a vegetable that are not allowed on the paleo diet are corn, and legumes.
Fruit– fresh or frozen are best; dried without sulfites added sugars or food colorings are also good preferably in smaller quantities because they will have a low water content and higher sugar content.
Note on nightshades: Which includes tomatoes, peppers, eggplant, tomatillos, ground cherries and more; these are not allowed in the autoimmune paleo diet due to the alkaloids causing gut inflammation and in some joint inflammation and/or pain.
Nuts/Seeds– Not allowed in an AIP (Autoimmune paleo diet), for those that tolerate and are not trying to heal from an autoimmune disorder it this can include things like almonds, walnuts, sesame seeds, macadamia nuts, flax, hemp (cashews and peanuts are technically legumes so are excluded). Nuts contain phytates, or phytic acids which can bind to the iron, zinc, manganese and calcium and prevent them from being assimilated so nuts are best eaten after being soaked.

So what is excluded from a paleo diet? All grains, legumes, white potatoes and dairy (with the exception of ghee and butter). Autoimmune paleo protocol further excludes eggs, nuts, seeds and nightshades.

At first glance it might seem that eating a paleo diet doesn’t leave many foods left to eat and that you end up lacking a variety of foods in your diet. But I have found it’s quite the opposite.  My two biggest tips when eating a paleo (well any dietary lifestyle) is to make the majority of your diet plant foods (meats are more acidic in the body and an acidic body causes more inflammation) and eat a rainbow of colors. 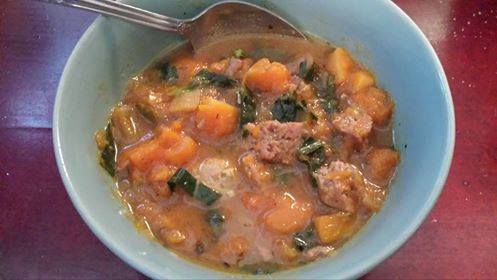 This is one of my regular soups that I modify depending on my mood.

about a lb. of fresh preservative free chicken apple sausage browned, then add to the pot a few minced garlic cloves one onion diced, once stalk of celery diced and sautéed until transparent if there is no oil in pot from the sausage add about a tablespoon.

Then add either a large butternut squash peeled and cubed or 2 lbs. of frozen diced squash to the pot. Add almost enough liquid (water or broth of choice) to cover it to about an inch below the top of the meat/veggie mix in the pot (more liquid will yield a thinner soup less a thicker)

Cook until squash is soft

Then add a few leaves of collard greens thinly sliced and rough chopped. 2 tablespoons of fresh sage, 2 tablespoons of dried parsley, 1 teaspoon of basil, (thyme is also a good herb to add in), some sea salt and pepper to taste and cook another 5-10 minutes.